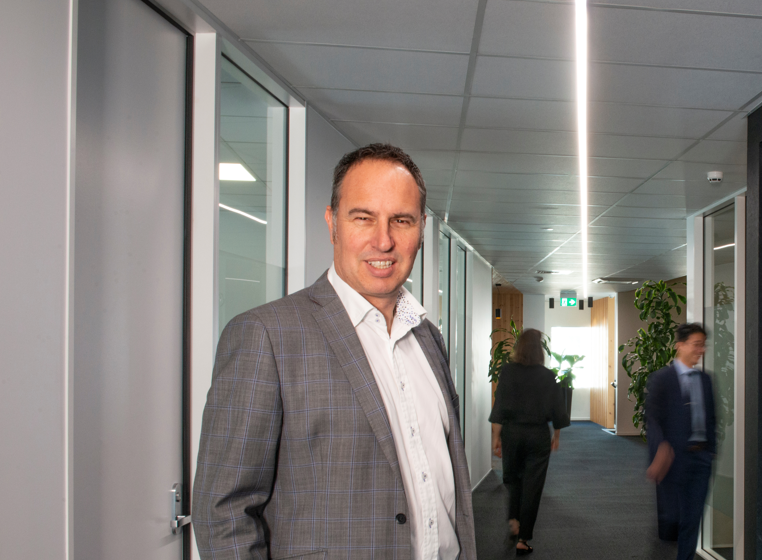 Scott Hamilton, Quayside’s CEO, has the honour of claiming the ‘The Tron’ as his place of birth but was raised in Auckland with a younger sister, with Engineer and Teacher parents.   Ironically, during his days at Auckland University of Technology studying a Bachelor of Business Studies, and perhaps a nod towards the future, he dipped his toes into the local government sector at what was then the Manukau Council, helping put together their annual plan.

After graduating and starting his career at the Countrywide Building Society (now part of the ANZ Group) he moved around the organisation in many roles over the next three years, gaining experience and knowledge in strategic thinking, systems and information management and growing a business – these remain his main interest areas in business.   After his CA exam, Scott then headed to London at 24 – worked for a casino and then into Barclays Global Investors (bought by Blackrock) working his way to Principal for Operations & IT, leading teams of analysts, financial specialists, and ICT.   He met his wife Andrea in London, married, and started a family before whanau and connection to New Zealand pulled them home.

He joined the newly formed OneSource (merger of UBIX and Cogent) on his return to Aotearoa with the remit to grow their market share through acquisitions – he achieved over the next few years including the sale of some organisations to private equity.   In 2005 ASB Group Investments came calling to head their funds management team focusing on superannuation, valuations and information management.   It was while at ASB Group that he had his first foray into a PIE scheme with the IRD – experience that would set him up well for his time here at Quayside.

Scott has been leading Quayside since 2010; initially a team of one based in Whakatane and then in Tauranga.  Scott says “I’m passionate about growing our capability to make a difference in our region – it’s about focusing on long-term thinking and transformational impact.”

Scott’s a keen supporter of the Fine Wine Delivery company, enjoying the fruits of many of New Zealand’s grape growing regions, along with a whiskey or two.   It goes well with a competitive round of 500 with friends or a night throwing a few vinyls on the turntable.   He is keen to get back on an airplane and do some international travelling – he loves the hustle and bustle of big cities with a few still to tick off in his passport.

His thinking time is often done with a fishing line in his hands or a leash taking the family cavoodle, Luna, for a walk.  A dedicated father of three kids, he’s keen to fit into his week a return to more regular social sport or resuming his marathon days of old – it’s a work in progress!  The second half of 2021 saw a complete abstinence of coffee which was watched with admiration by the Quayside team given he was a 6 cup a day guy!   We’re happy he’s back on the coffee bean wagon with us all in 2022.

Scott has been at the helm during Quayside’s success.  He’s seen a lot of change and the once small Quayside team has increased in size to complement that growth.  With all this success, his Dad jokes still have room for improvement.

Back to News + Media
Previous Post
Meet Mel, our Corporate Services Manager – it’s all about the people, culture and rugby
Next Post
Glenda Dufaur – our Exec Assistant, resident rain maker with a panache for nature
Menu