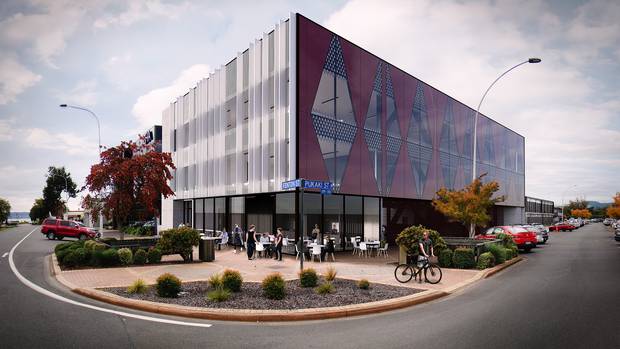 A new multimillion-dollar, architecturally-designed, three-storey building is being developed on Fenton St as the new home of the Bay of Plenty Regional Council.

The design of the building will have historical significance, showing the relationship between Ngāti Whakaue and the city’s leaders at the time when the township of Rotorua was established.

The building will be on the corner of Fenton and Pukaki Sts, where City Autos is currently, and will include other tenants, including a ground floor cafe.

The regional council’s 41 staff will move from its current site on Arawa St to the second floor of the new building. once it is completed at the end of next year.

There is space for two or three separate offices for lease on the top floor.

City Autos sold the site to developer Tony Bradley a year ago and will move the mechanics business to the former HK Heaton site on Hinemoa St after February, when the site will be demolished.

The new building is a joint venture between Bradley’s business, TPB Properties, and Quayside Holdings, the investment arm of the regional council.

Bradley said the development would be finished by the end of next year.

He said it was a nice looking building for the city, and particularly gave Fenton St a professional look alongside his other development a block away on the corner of Fenton and Arawa Sts where Tompkins Wake is.

The new building is also alongside the striking GHA building and two blocks away from the relatively new Rotorua Police Station.

Bradley said he wouldn’t comment on the cost of the building but confirmed it was a multi-million dollar development and said it was great to see the confidence in investment in Rotorua.

He said the total site was 1600sq m with 21 car parks. He said Colliers International was working with a couple of interested businesses for the ground floor cafe and already there was interest in the office space on the third floor.

He said the regional council’s floor would cater for 50 staff with room for more.

“The whole thing will look great on that corner site. It’s going to be a really nice design. It’s all definitely improving for Rotorua.”

Regional council property manager Annabel Chappell said the lease on the existing tenancy in Arawa St was to expire in March 2020 and staff had outgrown the offices.

“This move will not only ensure we have enough space for staff, but also for the equipment and vehicles they require to do their work.”

When asked how much it would cost to lease a new site she said that information was commercially sensitive to Quayside and TPB Properties.

However, she said the annual rent was within the budget allowance in the 2018-2028 Long Term Plan.

Pukaki St is named after the carved representation of a Ngāti Whakaue ancestor that once stood at the base of the Pukeroa Pa above Ohinemutu.

In 1877, Pukaki was presented by Ngāti Whakaue to Chief Judge Francis Dart Fenton as recognition to proceed with development of the Rotorua township.

The presentation was seen as a seal of trust between the Crown and Ngāti Whakaue. Fenton St is named after Judge Fenton.

Church said the building acknowledges the story of Fenton and Pukaki with the outward faces of the two street sides depicting Māori and colonial designs.

He said the Pukaki St side references patterning and colours of Māori while the Fenton St
side retains a colonial and rigid framework of the Pākehā culture.