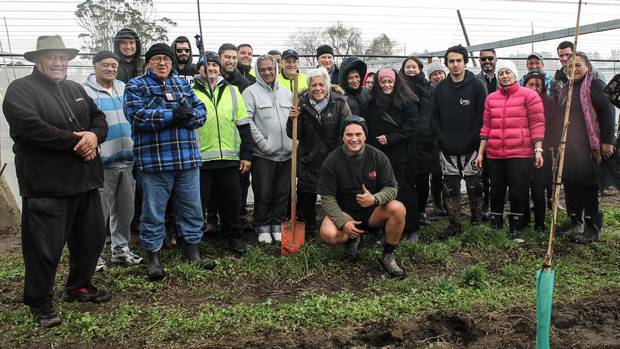 What was once a paddock of unwanted maize on an isolated Bay of Plenty island has become a key part of a $30 million investment into kiwifruit aimed at benefiting generations to come.

The section of Maori land on Matakana Island has been named as one of 10 future kiwifruit orchards in the Bay and Gisborne area. The orchards collectively cover 90ha of semi- and unproductive land and will be converted into productive orchards, which will eventually be transferred back to local landowners who work the land and help manage the business.

Maori trust Te Tumu Paeroa and Quayside Holdings announced the project yesterday, saying the 10 orchards would be planted over the next 18 months after two successful pilots, including Whai Orchard which was established in 2016 on the island.

A collective of 95 landowners on Matakana Island, known as Te Uretureture (named after the land involved), will eventually be able to reap the rewards of the deal.

Island residents had already help build Whai Orchard, restore wetlands on the island and establish an urupa (cemetery). Trustees were already attending board meetings with their children, with the expectation they would eventually take over.

She said the trust would help mentor landowners to learn business dealings and management, with the long-term goal of eventually handing the orchards over to Te Uretureture.

“The great benefit is allowing our Maori landowners to build and develop their own enterprise,” she said.

“Yes, we still get a return but it’s minimal. It’s 12 per cent. We are making our money back but the great benefit is this is built by Maori, on Maori land, for Maori.”

The project was believed to be the single largest kiwifruit investment on Maori land.

The business model allowed full ownership of the orchards to transfer to the landowners in an estimated 12 to 17 years, after achieving a targeted rate of return on capital invested.

In the interim, the land would be leased and Te Tumu Paeroa would build and operate the businesses. Land owners would be employed to work on the business and it was expected local residents would take up work when it came to picking time.

Te Tumu Paeroa chief executive and Maori trustee Jamie Tuuta said the trust wanted to see Maori land owners involved in the whole process – developing skills and hands-on experience in running kiwifruit orchards on the ground as well as in the boardroom.

“The benefits of this programme are more than just financial. It will enable owners to reconnect with their whenua [land] and support them to achieve their long-term aspirations for their land.”

By 2030, based on today’s return, the orchards were expected to generate more than $80,000 per hectare per annum of $7.1m by growing a mixture of premium gold kiwifruit and traditional green kiwifruit. In the 2015/16 season the average return for green kiwifruit was a record $56,673 per hectare.

“It’s difficult for Maori land owners to develop businesses on their land unless they have access to capital from other means, because many don’t want to use the land as security on a loan,” Mr Tuuta said.

“As a result, owners usually contract out the land to businesses who do have access to capital and can reap the financial rewards for taking the entrepreneurial risk. Maori land owners are missing out. Our programme addresses that, putting businesses in the hands of land owners.”

Te Tumu Paeroa is an independent, professional trustee organisation providing services to Maori land owners. It manages 100,000ha of Maori land, 2000 trusts and over $100m in client funds on behalf of 85,000 owners.

Quayside is the investment arm of the Bay of Plenty Regional Council and is, via a subsidiary, the majority shareholder of the Port of Tauranga and an issuer of securities of the New Zealand Exchange.

Where are the orchards?